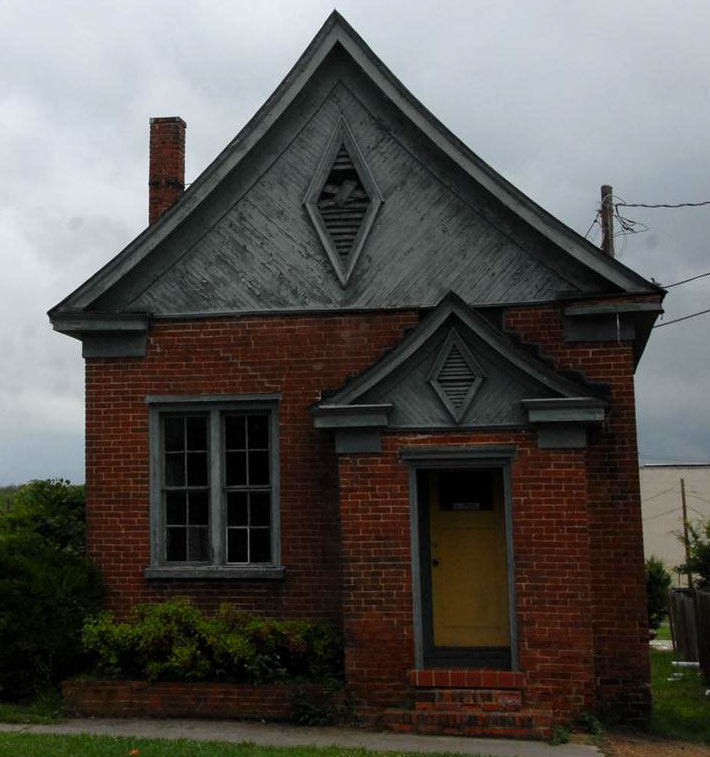 Weldon’s Jail is the oldest standing public facility building in the town of Weldon and is located on First Street between the CXS overpass and Washington Avenue,. It is vacant and plans are underway to restore it this coming year and ;hopefully, it will become a tourist attraction for Historic Weldon. Erected in the 1880’s, it has served the citizens of Weldon in many ways.

As a Jail….According to area citizens, the building was first used as a jail. Upon taking a trip down the narrow rickety staircase to the bottom floor of the structure, one will find two extremely small rooms. One of the rooms served as the jail cell and the other as a bathroom for the prisoners. It is easy to imagine a group of drunkards spending the “morning after” in the tiny cubicle.

As a School…At the turn of the century the building was being used not only as a jail, but as a town hall and free school. All five grades were in one room. According to a letter Mrs. Ida Vick(deceased), a noted Weldon historian, received from Mr. James Tilghman, a Weldon resident at one time who attended school in the building, Sallie Gouch was the teacher. Miss Gouch received thirty dollars per month for her services. Times have changed!

As a Town Meeting and Band Practice Hall…The building was also used as a town meeting hall and a place for the town band to practice. It was customary in the early 1900’s for towns to have a band. The Weldon town band was directed by Mr. J. A. Hardison, who came to Weldon as the first manager of the Coca-Cola Plant.

As a Library…The building was converted to a library in 1924. The initial movement for a public library in Weldon was made through the efforts of a local book club. They circulated a petition to those interested in a town supported library, which met with great success. The town board supported the library project and in May of 1923, the issue was passed by a strong majority in a town vote. The library opened its door in July of 1924 with the majority of the books being donated by the Book Club. The Weldon Memorial Library moved to the Historic Weldon Train Deport in 1979.

If the Weldon Jail could speak, it would certainly be able to weave a true picture of life in Weldon during the past century. The building itself is indeed a museum piece.

Source of Information is from an article by Bert Kittner published in the Halifax Heritage pamphlet.